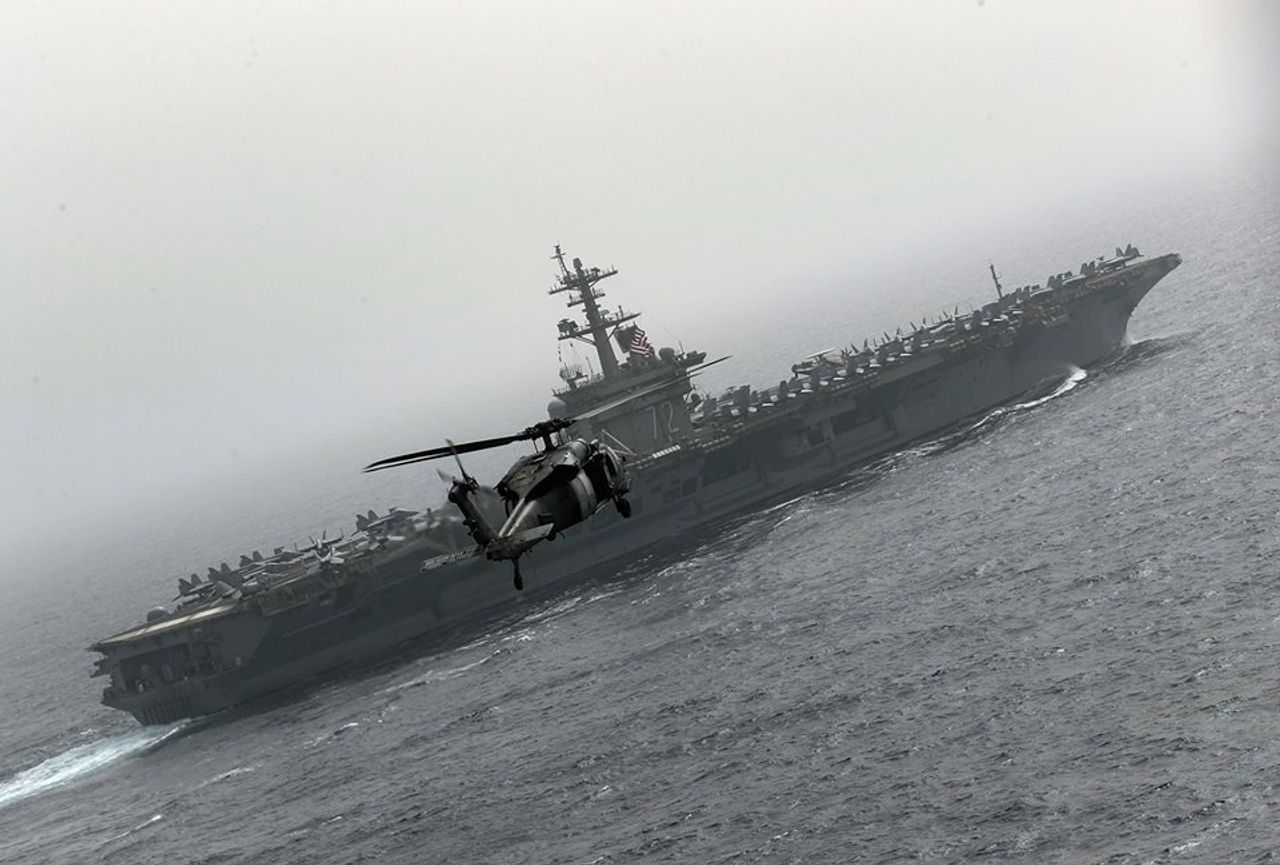 Even as the United States and its European allies beat the drums of war against Russia over Ukraine, the United States Navy is engaged in provocative war games in the South China Sea aimed at threatening China. These naval exercises are a clear indication that Pentagon war planners recognize that any conflict with Russia could very quickly expand to involve China.

Two nuclear-powered aircraft carriers – the USS Carl Vinson and the USS Abraham Lincoln – and their strike groups began joint military exercises on Sunday. There was no pretense that the exercises had benign intent. They were aimed, according to a press release, “to strengthen integrated maritime operations at sea and combat readiness”.

The Pentagon’s AirSea Battle strategy for the war with China relies on US control of waters adjacent to the Chinese mainland, particularly Hainan Island, which is adjacent to the South China Sea and home to key submarine bases. AirSea Battle envisions a massive air and missile assault on Chinese military bases and infrastructure from US bases, warships and submarines.

The inclusion of US amphibious naval units is particularly threatening, not only to the Chinese mainland, but also to Chinese-controlled islets in the South China Sea, which would be prime targets in any US war against China.

The US media has all but ignored US naval war games, focusing instead on the Chinese response – the dispatch of warplanes to Taiwan’s Air Defense Identification Zone (ADIZ), which are invariably portrayed as “intrusions” and “threats” and cited as evidence. Beijing’s intentions to invade Taiwan. Taiwan authorities said 39 Chinese military planes entered its ADIZ on Sunday, followed by 13 more on Monday.

This anti-China propaganda involves yet another hypocritical double standard. When the US Navy conducts war games thousands of miles from the nearest US territory, it operates in “international waters” to ensure “a free and open Indo-Pacific”. Yet when Chinese fighter jets fly in international airspace close to the Chinese mainland, it qualifies as Chinese aggression. ZADIs in general have no status in international law. Additionally, the Taiwanese ADIZ provocatively includes areas above mainland China.

As with its actions against Russia over Ukraine, Washington is engaged in a similar modus operandi with China over Taiwan. Russian military operations on Russian territory are cited as “evidence” of an imminent invasion of Ukraine. It is the pretext for threats against Moscow and a huge American military build-up in Eastern Europe, such as the assembly of what Rear Admiral Dan Martin, commander of the USS Carl Vinson strike group, described as a “overwhelming maritime force” against China.

In an interview with Australian media in Sydney last week, British Foreign Secretary Liz Truss warned, without providing any evidence, that China could exploit the Ukraine crisis to invade Taiwan. “Russia is working more closely with China than it ever has. The aggressors work together and I think it is incumbent on countries like ours to work together,” she said.

In the same order of ideas, FinancialTimes Commentator Gideon Rachman published a lengthy article last weekend titled “New World Order: Russia and China’s Plans Take Shape.” He inadvertently pointed to the underlying motives, not so much of Russian and Chinese geopolitics, but of aggressive moves by US imperialism in Eastern Europe and East Asia.

Rachman said, “Two features of the current world order that Russians and Chinese frequently oppose are ‘unipolarity’ and ‘universality’. Put simply, they think the current arrangements give America too much power and they are determined to change that.

In reality, the boot is on the other foot: in its historic decline, American imperialism is determined to consolidate the world domination it established in the aftermath of the Second World War by all means, including military ones. His triumphalism after the dissolution of the Soviet Union in 1991 has faded and he now targets what he sees as the main threats to the post-war imperialist order, in which he was the leader.

The COVID-19 pandemic has dramatically escalated geopolitical tensions and accelerated war planning at the Pentagon. Faced with an immense domestic social, economic, and political crisis that is leading to growing class conflict, the Biden administration seeks to project these social tensions outward against an external enemy, dramatically increasing the danger of war.

While the immediate target is Russia, US Navy drills in the waters off mainland China are a warning that wherever conflict might begin, it has the potential to quickly escalate into a disastrous global war involving powers with nuclear weapons.

After three decades of wars led by the United States, the outbreak of a third world war, which would be fought with nuclear weapons, is an imminent and concrete danger.