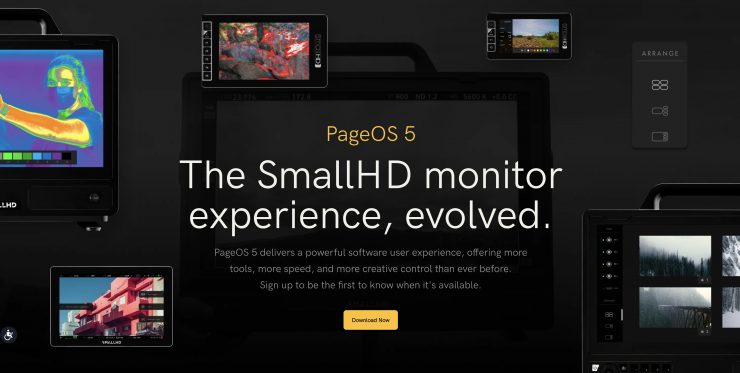 SmallHD’s PageOS 5 has finally come out of beta and is now available for download. I’ve been using PageOS 5 beta versions for a few months on my SmallHD monitors and the new upgraded OS has some great new features.

There are quite a few new features and improved features in the PageOS 5 update. Below you can see what some of the key new additions are:

EL Zone is a stops-based exposure map tool, developed in conjunction with legendary cinematographer, Ed Lachman, ASC that works like a virtual spot meter, replacing IRE exposure values ​​with stops. Camera sensor data provides a reference point and a false color represents each stop above and below 18% gray, allowing for easier and more intuitive communication on set.

The EI zone can only be used if you supply your SmallHD monitor with a Log signal. This does not work if you input a signal with an enabled LUT.

Multi-View lets you view up to 4 camera feeds on both Cine and OLED Series 4K monitors. You can choose from multiple multi-view configuration options and assign scopes and other software tools for endless
variety of customizable layouts.

Look-Around Camera Control lets you view and adjust crucial camera control functions and PageOS 5 tools at the same time on Smart 7 Series monitors with a camera control interface you can anchor to each page.

Color Pipe lets you easily configure each of the five independent 4Ks
video inputs on SmallHD 4K production monitors with custom input and output display configuration. Convert camera log signals to multiple HDR or SDR display configurations and switch between these presets with the click of a function button on any page.

Calman integration lets you use a built-in Calman calibration tool for Cine Series and OLED 4K production monitors that automatically calibrates for ultimate color accuracy. You simply connect your 4K monitor via Ethernet to a computer with a calibration probe running Portrait Displays Calman, which downloads a calibration LUT directly to your
monitor when you are done.

Matthew Allard is a multi-award-winning, ACS-accredited freelance cinematographer with 30 years of experience working in over 50 countries around the world.

He is the editor of Newsshooter.com and has been writing on the site since 2010.

Matthew is available to be hired as a DP in Japan or to work anywhere else in the world.