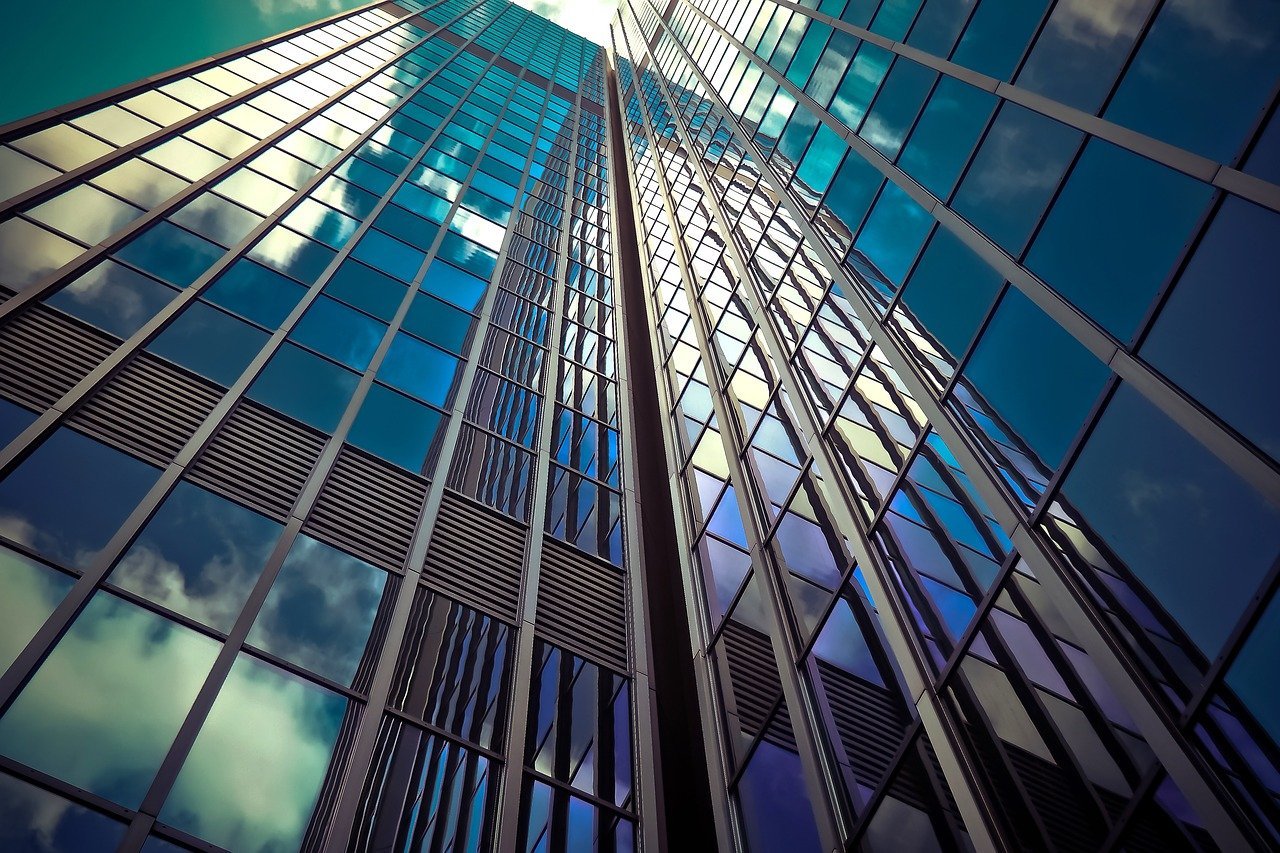 Gordon is a Technology Advocate at Red Hat, where he works on emerging technology strategy and writes about technology, trends, and their business impact. He is a frequent speaker at customer and industry events. Some of the topics he works on include edge, blockchain, AI, quantum, cloud-native platforms, and next-generation application architectures. His books include “From pots and vats to programs and applications‘ and ‘How Open Source ate software.’

Conveyor holds a unique position in the open source community due to its focus on building and supporting tools to help applications migrate to the hybrid cloud. Konveyor includes tools like Tackle, Move2Kube, and Crane, all of which are designed to help rehost, reformat, and refactor apps so they’re comfortable in the cloud.

Recently, with the help of project member Red Hat, the Konveyor community surveyed companies planning or adopting Kuberenetes about their activities, thoughts, and plans. The result is 2022 Application Modernization Status Report.

We interviewed 600 people by phone, including 300 in the US, 150 in the UK and 150 English speakers from the Asia/Pacific region (Australia, New Zealand, Hong Kong, Singapore).

The survey took place in October and November 2021. Half of the respondents were IT decision makers (ITDM), 25% were backend developers and 25% were software architects.

In this article, we’ll dive deeper into the main survey findings and dig into some of the reasons behind them. If you’d rather watch a video about those results, here’s Illuminas CEO Jay Shutter and Red Hat’s Jonathan Recinos discussing the results: 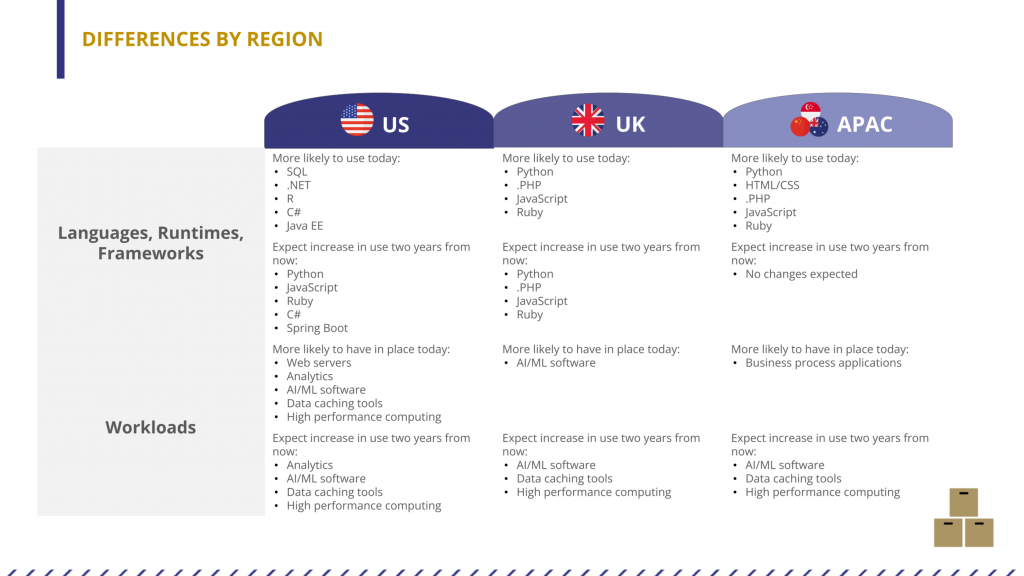 Our respondents had a wide range of motivations and applications to deal with in their businesses. But the underlying reasons and technological motivations behind their decisions varied by region. The United States is very driven by SQL, .NET, R, C# and Java EE. The UK and APAC regions, however, favor Python, PHP, JavaScript, and Ruby. 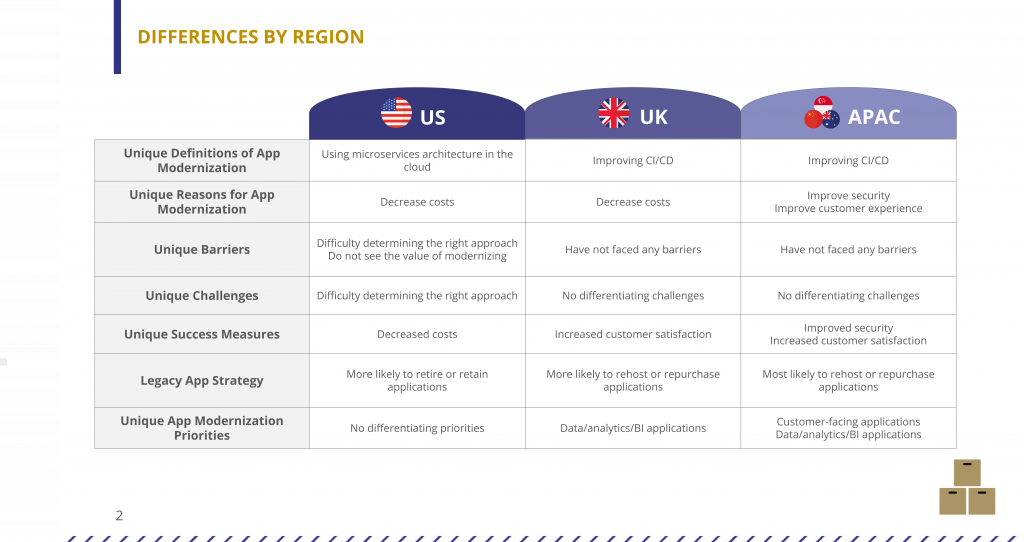 Definitions of what exactly modernization means also differed by region. In the United States, application modernization is moving towards a cloud architecture based on microservices. In the UK and APAC regions, this typically means moving to a cloud-based CI/CD model.

That said, not everything is easy and it doesn’t happen overnight. While some regions haven’t made enough progress in their app modernization journey to encounter serious roadblocks, others (notably the United States) report that choosing a simple approach can be difficult. Organizations have many options to choose from, and each option has different levels of complexity. 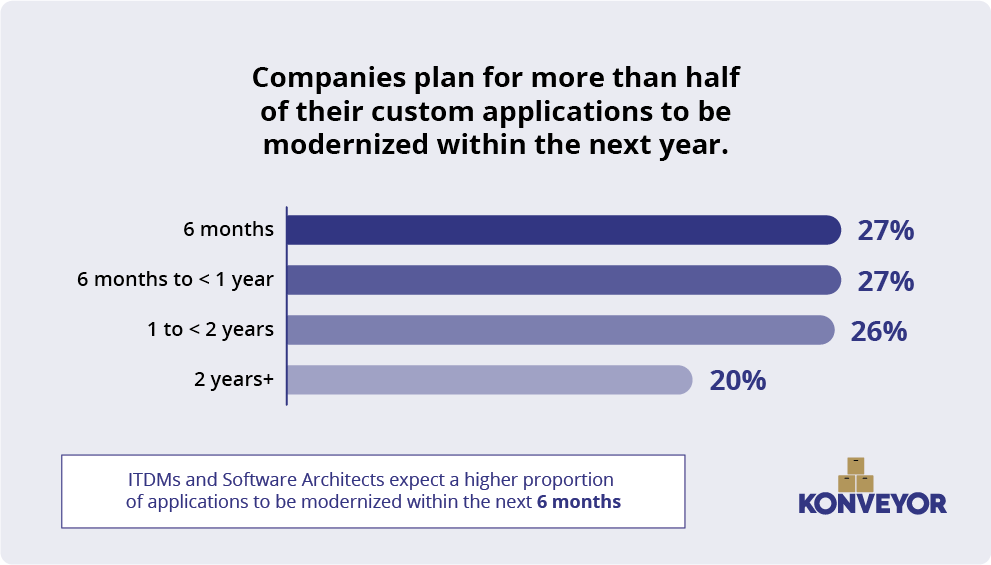 Companies expect a hybrid shift in the next 2 years

According to those who responded to our survey, the next two years should see a shift from purely public cloud usage to a more hybrid approach that also incorporates private cloud hosting. While 98% of respondents today said their apps were hosted in the public cloud, 43% said they also hosted off-premises private clouds.

Respondents were also asked where they see their applications hosted in two years. Those who would host in offsite private clouds rose to 55% while public cloud forecasts fell 10 percentage points to 88%, indicating that some companies may be considering exiting. 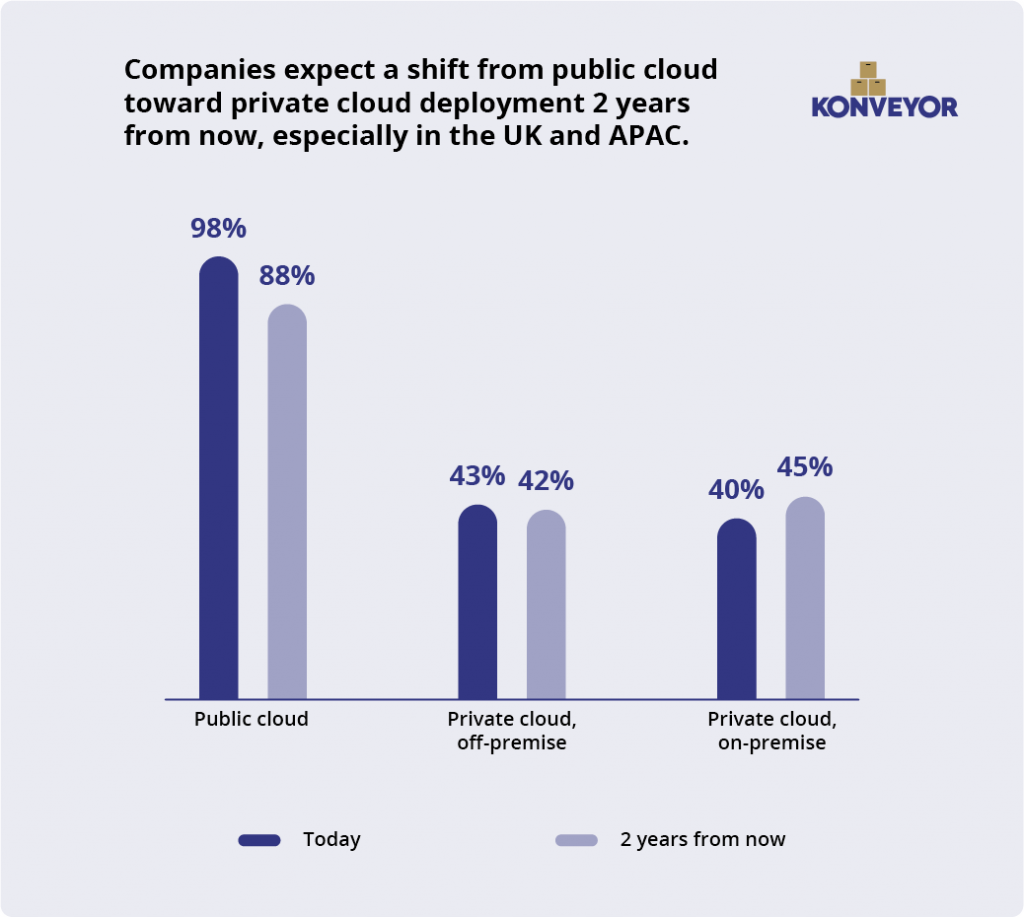 The survey tells us that modernization is primarily driven by the need for reliability, scalability, and security. Lower costs were also on the list, but as we frequently see in other surveys of technology adoption or change, it is not the driving factor. 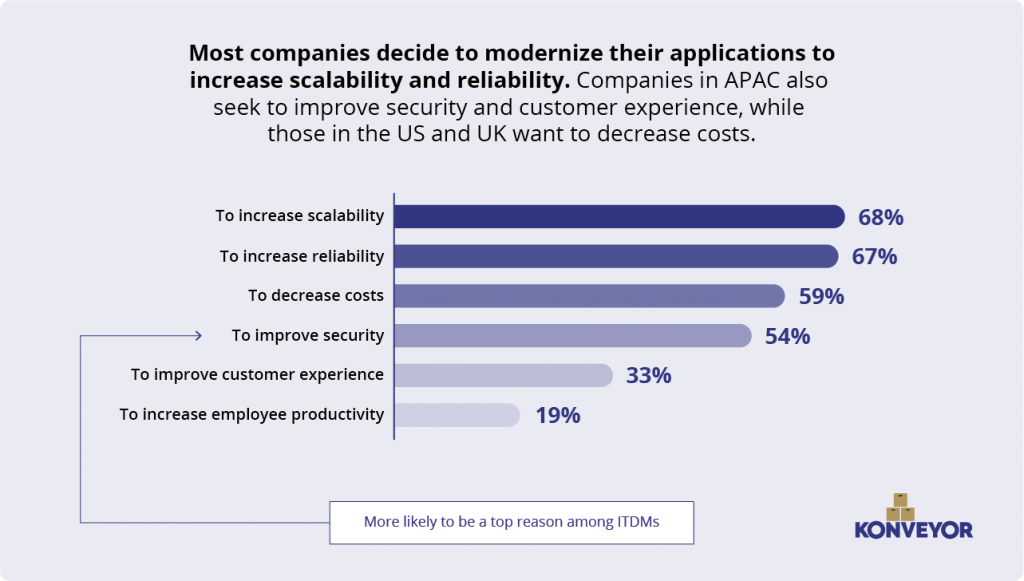 Migration can be expensive 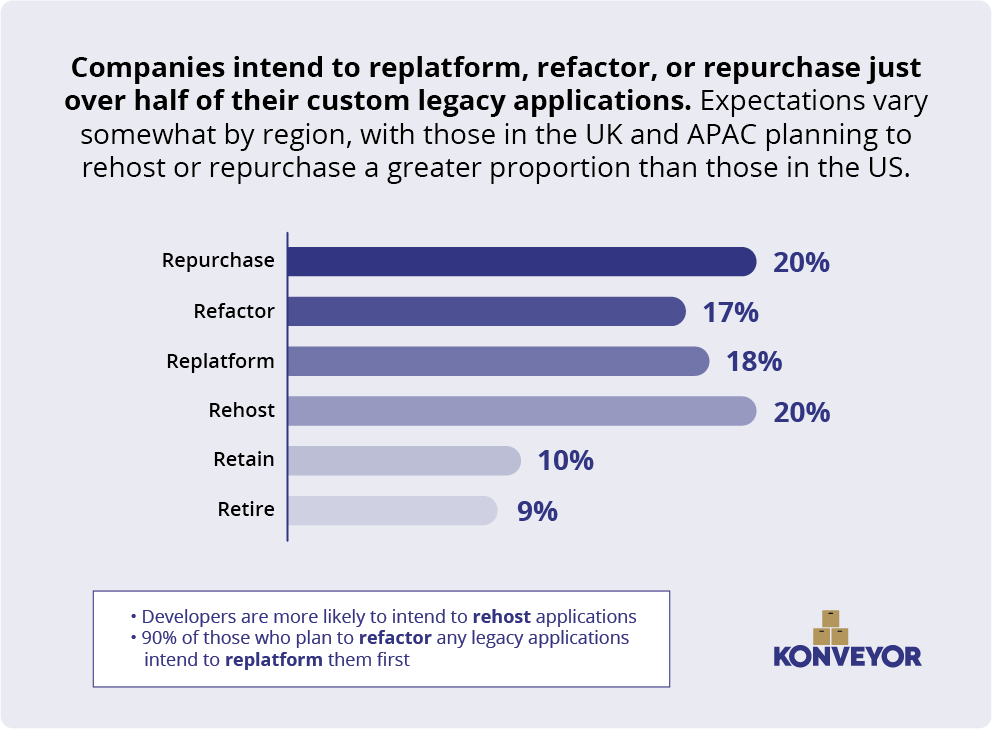 Moving an application to the cloud can take time and effort. It’s money, when it comes to hogging developers’ time. But in our survey, 20% of respondents indicated that they intend to repurchase software or tools for migration purposes.

Konveyor’s open source tools, including Forklift and Crane, can help you manage many of these aspects of changing hosting. Forklift focuses on migrating VMs to Kubernetes and provides the ability to migrate multiple VMs to KubeVirt with minimal downtime.

Crane is a rehosting tool that serves a different use case. Developers and operations teams may often wish to migrate between older and newer versions of Kubernetes, evacuate a cluster, or migrate to a different underlying infrastructure. Crane can help because it helps organizations migrate applications between Kubernetes clusters.

The fact that organizations are looking to spend funds to address the migration issue is not surprising when you see what their priorities are.

Scalability and reliability are the main reasons to migrate 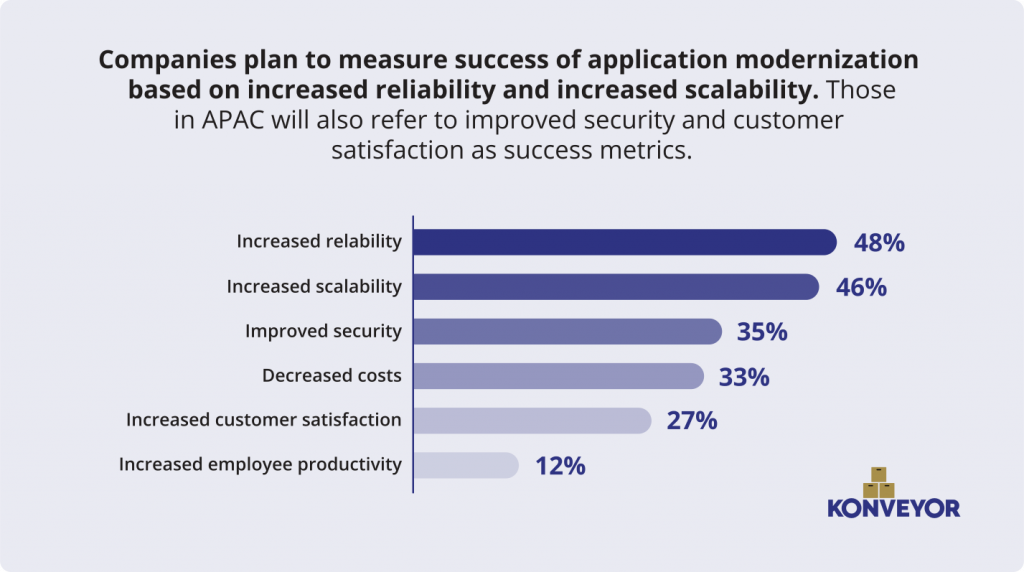 How will companies measure the success of their application modernizations? Cost reduction is a factor. Costs always matter to some extent; ask anyone who has ever owned a budget. But increased reliability (especially in the US) and scalability topped the list, overall, with equally high security.

This was an issue with significant regional differences. Improved security was ranked significantly higher for APAC than for other regions, and even outpaced increased scalability there. APAC was also much more likely to measure increased customer satisfaction, especially compared to the United States.

The United States is more advanced than the others 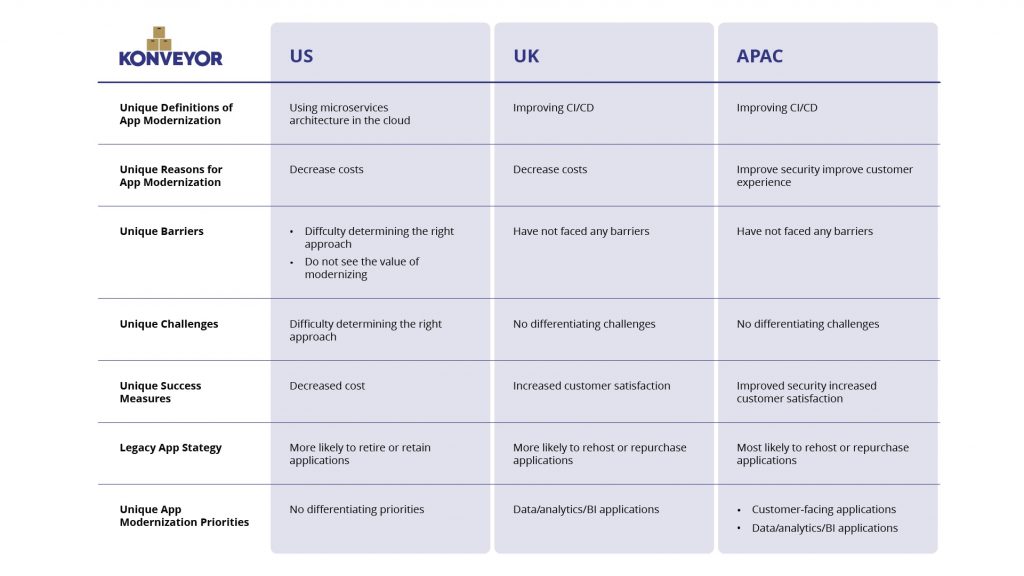 We don’t usually find striking differences between regions, but sometimes we see more subtle ones that form a pattern, as was the case here.

In this case, we see the US uniquely defining application modernization as using a cloud-based microservices architecture, while the other two regions defined it as improving CI/CD. This suggests that the United States is more advanced in app modernization. Having a well-developed CI/CD pipeline is fundamental to microservices and other cloud-native technology approaches.

We see something similar popping up when it comes to obstacles and challenges. The UK and APAC did not encounter many obstacles. It’s reasonable to assume that’s because they’re not far enough along in the process yet. In contrast, the United States focuses on the difficulty of determining the right approach, suggesting that they are actively looking for the best way to implement a modernization strategy in their application portfolio.

Hybrid is the future

Respondents in our survey all have one thing in common: they see cloud-hosted, container-based microservices as the future of their application fleets. While the manner, method, and timelines for migrating their legacy applications to the cloud will vary from company to company, the basic needs and wants are mostly the same within regions.

Every business sees the cloud as a way to increase application scalability and reliability. The path to this new cloudy world is different for every business, but the tools they can use to get there remain the same. the Conveyor community invites you to read the full report and to check out its free open source tools for help with migrations.

Picture by Don’t touch my labels! Michel Gaïda from Pixabay

How to Download a TikTok Video Without the Watermark